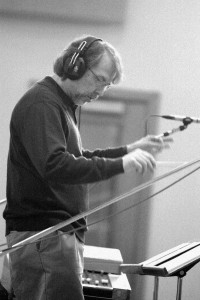 Over the past 30 years you could have dropped in on Don Hart and found him writing with Phish front man Trey Anastasio, arranging horns for a pop artist like Amy Grant, or writing lush string arrangements for country megastars like Lee Brice, Wynonna and Martina McBride.

If you were watching TV you might have heard his work in a national advertisement, or in a series for A&E, CNN, TBS, or the History Channel.

In 2011-12, his ongoing work with legendary Phish front-man, Trey Anastasio, garnered a sold out 2012 Winter Symphony Tour for which Don scored the show and also composed some of the music. This very successful tour was well-received by concert goers, orchestra members and the media, as evidenced by this Rolling Stone review of the March 10 concert with the Los Angeles Philharmonic.

Don Hart’s been a busy man in Nashville, helping put his unique and award-winning sound on future hit songs in genres ranging from country to pop, gospel to rock, and earning Grammy, Clio, Dove, and a Grammy nomination in 2006 for his arrangement of ‘Scary
Things’ from the award winning children’s album ‘Kid Pan Alley Nashville’
(Parents’ Choice Gold Award and NAPPA Gold Award).

He crafted the string arrangements on Randy Travis’ 2005 Grammy winning album ‘Worship and Praise’, and provided the iconic arrangement on the Martina McBride single, ‘In My Daughter’s Eyes’, seen on the 2003 CMA awards telecast.

“I try to work with everyone,” says Hart. “I appreciate all styles of music, all types of artists, and love figuring out what makes an artist tick – what enables them to communicate with their audience. That information allows me to determine the direction of a particular song or track, and how my arrangement can pave the way. I then create that special part that brings everything together.”

Focused On The Sound

Don’s instrumental and choral arrangements have been published by a number of companies, including Hal Leonard, Word Entertainment, Shawnee Press and Lorenz. He has also arranged and orchestrated for McGraw-Hill’s ‘music curriculum’ series.

Don and his wife Kathy live in Nashville, TN. Their son Patrick is a graduate student at McGill  niversity, and their daughter Justine is a student at the University of Iowa.